I never used to have the slightest enthusiasm for Christmas markets. Growing up in the US, I didn’t quite understand what they were. But after nearly a decade living in cities like Budapest with a serious devotion to their annual markets, I’ve seen the light. Christmas markets are fantastic.

If the grinch in you is saying “yeah right,” then keep reading. If you were with me from the first mention of Christmas markets, you should also keep reading. I’ll explain everything you need to know to get the most out of a central European Christmas market journey that will fill you with enough joy and Christmas spirit to last at least until next year.

Why You Need a Christmas Market Trip

If the true joys of life come from contrasts, then sipping hot gluhwein (mulled wine) on a snowy afternoon is about as good as it gets.

For most of us, the Christmas season is about 30 days of trying to figure out the right gifts, making plans, and shopping followed by maybe two days of actually enjoying Christmas. With Christmas markets, however, you can extend the good parts of the holiday season throughout the month or so before the big day. Frankly, it makes the holidays a lot fairer.

This is especially true if your Christmas with family tends to be on the stressful side. A visit to some Christmas markets is the perfect stress-free way to still enjoy everything the holiday has to offer. Now, let’s get down to logistics. 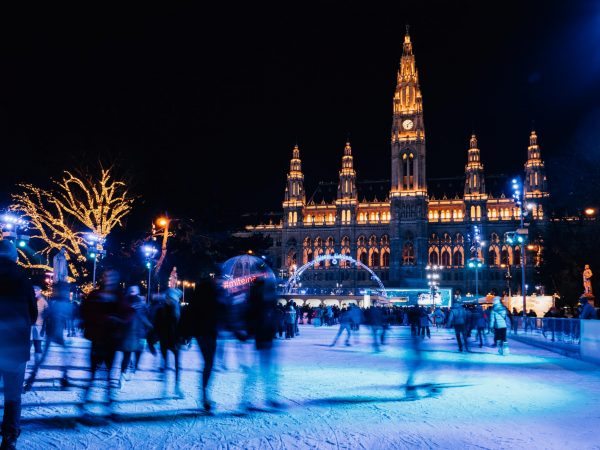 There are some practical considerations you’ll want to think about before you go. The first obviously is accomodation and travel. Obvious advice being obvious, it’s imperative that you book everything as far in advance as possible.

These cities are all popular winter destinations in part because people have some free time to travel and having a Christmas market makes a city a particularly appealing destination. So whether you’re talking about hotels, Airbnbs, buses, or flights, you’re going to save a lot by getting a head start.

Also, although it will be tricky on this trip, try to maximize how much time you spend in each city during the regular workweek. Christmas markets are all going to be far less busy from Monday to Friday during the day and just about the only thing that can ruin a good Christmas market is it being overcrowded.

Lastly, try and have some idea of where you want to go and what you’d like to do (what this guide is for!). Most of these cities have more than one Christmas market and they can get pretty large. While you don’t need to plan every minute, it’s best to find a balance between wandering / exploring and finding the perfect gift, snack, or drink.

Lastly, consider your transportation carefully. This whole trip is right around 1,000km so make sure you’re not doing it all in the middle seat of a compact car. More on that at the end.

First, the practical information you need to know: Munich’s 2019 Christmas market lasts from November 27th to December 24th at the central Marienplatz (with many other markets throughout the city as well).

One thing the Munich market has to offer is a nice balance between the super traditional and the unexpected. You’ll find Fatschnkindl and Kletznbrot in droves (that’s a nutty bread with fruit and honey and a baby Jesus in a manger shaped pastry respectively). But you can also find foods which show the global city Munich has become including burritos, and Swiss raclette. 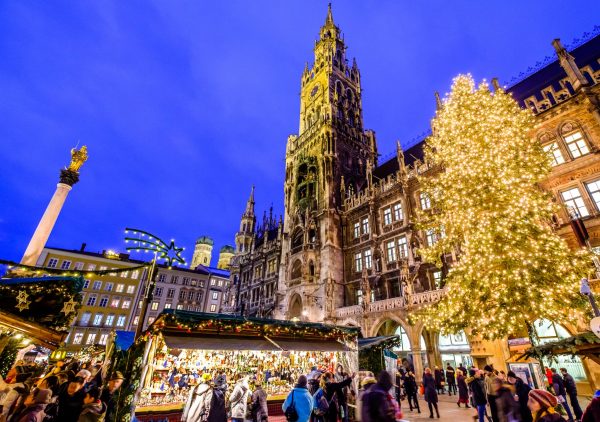 You can also choose between your Christmas markets. The aforementioned one at Marienplatz is the classic, but also tends to be the most crowded. There are also markets inside the Royal Palace, at the Chinese Tower inside the English Garden, at Sendlinger Tor, Rotkreuzplatz, Weissenburger Platz, and even at Theresienwiese (where Oktoberfest is held every year).

What this means is that you can spend just a day or two enjoying Munich’s Christmas markets or you can stretch it out to see them all. Each has a slightly different flair, some focusing more on food, others on crafts, some being more traditional, while others go big on activities and entertainment.

Second Stop: Doing Tradition Better than Anyone at the Vienna Christmas Market

While living in Budapest has put me strongly on that side of the minor rivalry between these two cities, even I have to acknowledge that Vienna in winter is simply magical. The first time I visited the city it was blanketed in snow and putting on a serious charm offensive. It worked and I’ve always considered Vienna a lovely city to visit in winter because of its Christmas markets, cozy cafes, and world-class museums.

Vienna’s Christmas market dates back to 1298, so it’s no surprise that they’ve got the traditional market down to a science. Held from November 15th (a bit earlier than Munich) to December 26th in front of the Rathaus (yes, that is what their city hall is called) it’s filled with singing choirs, Christmas trees, hand-crafts, ice skating, and even a ferris wheel.

For anyone traveling with kids, Vienna’s Christmas markets also offer lots of affordable activities baking biscuits, making candles, or even burning designs into wooden boxes (with adult supervision of course). There’s also a merry-go-round and real reindeer to enchant kids and adults alike.

Like Munich, Vienna has many Christmas markets throughout the city and has enough activities to last you at least a few days. The ones at the Schönbrunn Palace, Belvedere Palace, and Maria-Theresien Platz are particularly good.

Third Stop: Christmas Markets with a Hungarian Flair in Budapest

Like Munich and Vienna, Budapest is filled with Christmas markets large and small. The biggest is at Vörösmarty Square but you can find smaller ones throughout the city (they can be fun to discover on winter walks). The markets here tend to run longer with the main one beginning in early November and running all the way to the first hours of 2020.

No surprise you can find a nice blend of the traditional food and drink you’d find in the German speaking cities above (grilled sausages, mulled wine, etc.) alongside Hungarian specifics like kürtöskalács (chimney cake) and goulash. If you’re really feeling brave you can even try some Hungarian pálinka, a strong brandy liquor which blends sweetness with a hefty burn. Still, few things will warm you up faster on a chilly winter evening. 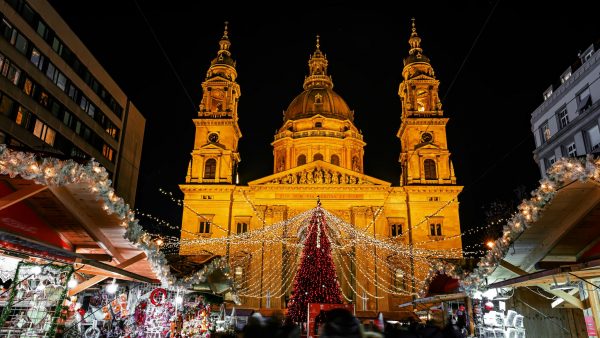 You can also find ice rinks, traditional dancing, concerts, and even theater performances throughout November and December. A few of the hipper Budapest restaurants even have food trucks in case you’re sick of traditional Christmas fare at this point. If you’d like some nice organic food products from Hungarian villages, you can always check out the Közös Piac Farmers’ Market every week as well.

Don’t forget that Budapest is also a city of hot springs! Personally, I think there’s hardly any better way to enjoy a winter day than in an outdoor hot spring so when your feet are tired from exploring, consider one of the many bathhouses as a great option to rest and recover. If you want something indoors, I personally love the old Ottoman vibe of the Rudas baths. For the outdoor classic, check out the Széchenyi baths, and for the old opulence of the Austro-Hungarian era you can’t beat the Gellért hotel baths.

To Finish: The Best Ranked Christmas Market in Europe, Zagreb

While all four of these cities frequently make the list of the top 10 Christmas markets in Europe, Zagreb has won the poll the most often of the bunch. But why? There’s no big flashy thing that makes Zagreb stand out. Instead, it’s what I’ve always loved about the city. It has so much of what makes Central Europe special with smaller crowds and better prices. It’s really that simple.

From the charming old town all the way to the Sava River itself, Zagreb has plenty of markets filled with the ice rinks, concerts, food stalls, and traditional crafts you love. But of course there’s a Croatian twist to a few things. For one, you can’t miss trying Zagreb’s local favorite dish of krpice sa zeljem, or pasta with cabbage. If that sounds positively strange, trust me, that’s just because you’ve never tried it. 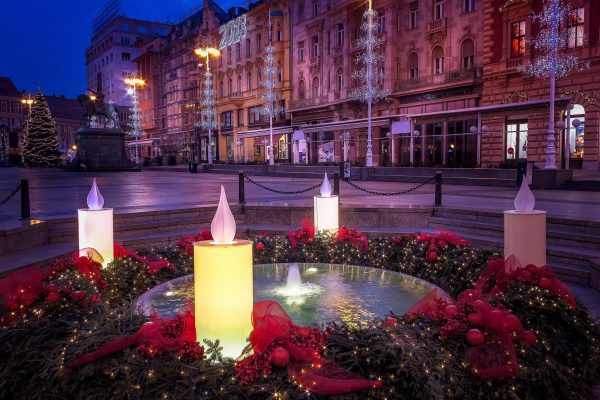 You’ll also find a photo exhibition put on by the local Museum of Illusion. But if you’re feeling the need for some empathy in the colder months, you can always take a Christmas market break to see my personal favorite Zagreb museum: the Museum of Broken Relationships. Don’t worry, it’s not as sad as it sounds, in fact it’s utterly charming.

Zagreb also makes sense as your final stop because the markets run a bit later, not starting until November 30th but finishing all the way on January 7th.

As mentioned above, trains, planes, and hotels fill up fast in these crucial advent weeks so booking now makes sense. If you’re interested in a trip with friends but don’t have a car, there are affordable buses with options to sit around a table to play cards, board games, or just chat the hours away making big plans for the new year.

Ready for your next adventure?

Summer is coming to an end, meaning prime city exploring weather is upon us! And it’s European Mobility Week. To celebrate ...
Preberi več